4th Feb 2011. Melbourne, The Age HQ – from ‘The Data Newsroom’ event. For the first time, The Age Newspaper opened their doors to hackers** asking them to dig into three datasets not previously released to the public:

(2) A database that includes the archives of all Age articles along with key words and relationships between those keywords. 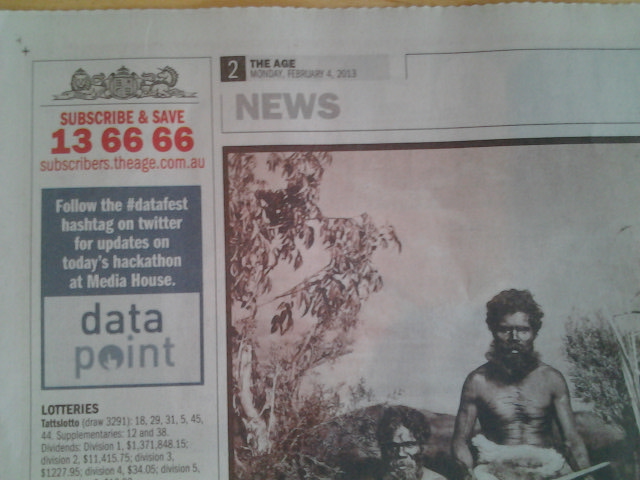 The challenge: hackers entered a beehive of activity called the ‘Data Newsroom’ where they were presented with the data and asked to form teams made up of journalists, developers and citizens so as to produce a story for TheAge.com.au

Fourteen teams were formed who then spent the day formulating a two minute ‘pitch’ to a ‘Dragon’s Den’ of data journalism experts.

Four teams were then shortlisted and participants were sent to the Public Lecture at Melbourne University by the Inventor of the Web (Sir Tim Berners Lee), where the winner would be announced and be congratulated by Sir Tim. See other posts on this blog for winner announcements and pictures.

Hacker = by ‘hacker‘ we are referring to anyone who likes to ‘playfully experiment with doing things quicker and more efficiently’, including the likes of our participants which included: developers, graphic design artists, journalists, students, lecturers, visualisation coders, programmers and citizens who care about