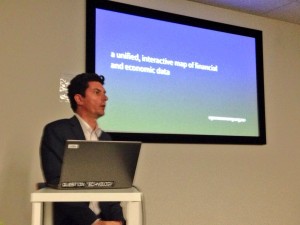 Tonight at Open Knowledge Melbourne Greens Senator Scott Ludlam came to present Open Economy (more info), a visualisation tool for budget data. The site allows you to drill down into data from the Australian budget to see where money was spent, as well as load data from other sources (e.g. BHP, or Rio Tinto) and compare government spending with big corporations.

The Greens funded the tool’s development several years back as a proof of concept, but it hasn’t received much love since then, and in Scott’s own words, is boring and clunky. Scott’s purpose for showing us this tool was to get our advice, and hopefully some people-power to actually improve or rework the software to make it a viable tool with which to make compelling arguments that can’t be easily portrayed through tabular data. Currently if Scott wants to present information about the budget or similar, he has to spend days assembling something in Photoshop or After Effects, and he’s convinced there must be a better, quicker way, to generate pretty visualisations with any financial data.

After Scott’s presentation, Paul Valla, one of the ThoughtWorkers, presented the beginnings of an API he’s been working on for about a week, which aims to take the machine-unfriendly spreadsheets from http://data.gov.au/dataset/budget-2014-15-tables-and-data, and present them in a machine-readable form for use by people in their own sites. This would lower the bar for entry to others interested in visualising this data, and will hopefully result in many people creating their own finance visualisation websites. 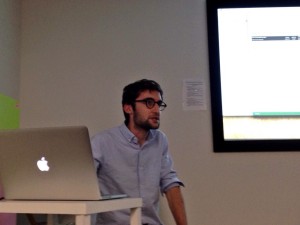 Following Paul’s presentation there was time for questions, and the general consensus was that having a standardised data format and/or API is the first step, especially if we can find a format that has been standardised on elsewhere (somebody mentioned the UK open budget, I believe?), since then tools that already exist for that format can be used by us. Many said that attempting to shoehorn all conceivable functionality into a single app is a recipe for clutter and confusion, and that it would be much better to have the API, and design many smaller apps for different purposes.

The discussion was really valuable and in-depth, and impossible to fully cover here, but it sounds like lots of people have lots of ideas for how to make this work, and we hope to see a small and flexible team at upcoming Open Knowledge meetups keen to work on this problem. In the coming weeks the Open Knowledge organisers will be focussing on preparing potential participants for GovHack, and running various presentations and tutorials on potentially useful tools, but anybody interested in working on the Open Economy project is welcome to join us at ThoughtWorks and form a focus group to play around with this concept and see what they can come up with.

I and the rest of the Open Knowledge ambassadors want to thank Scott Ludlam and all the other participants for coming and making the night a great success; we had a fantastic number of attendees, and are really pleased with how everything went!

If anybody has comments or ideas about this project, feel free to tweet @okfnau or @senatorludlam, join our mailing list, or attend one of our meetups!